May 17th
This article is final edition of Cambodia : Angkor Wat and Thai : Bangkok trip. 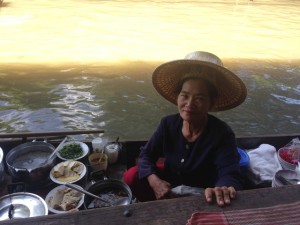 Floating market was the place I’d like to go in Thai in the end.
In this trip, I couldn’t go sea and would like to go waterfront at any cost.

The half-day floating market tour was only optional tour I made reservation via Japanese travel agency.

At 6:00 AM, in the front of hotel, I took taxi to Sukhumvit station where was designated place.
I ripped off…゛(｀ヘ´#)

I remember a bush telephone saying that not to take a taxi parking the front of hotel.

I arrived Sukhumvit station at 7:00 AM. 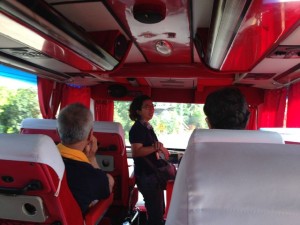 I took the bus with native guide of H.I.S.
There are 4 persons, 2 middle-aged men, a young woman, and me in a motorcoach.
It was chartered and luxurious.ヾ(〃^∇^)ﾉ♪

All of persons were Japanese and I felt easy.

I thought such tour I don’t have to think, move, and feel nervous was also good.

I accompanied with a woman got to know here.
I think getting know and talking each other is very delightful.
I and her registered Face Book-friends each other.

At first, we went to Coconut Firm. 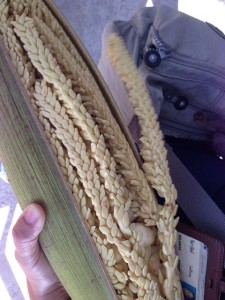 the berry of coconut 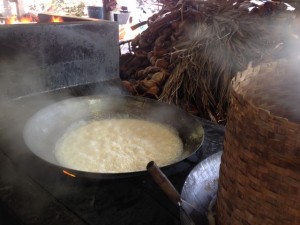 Coconuts are boiled in a large pan.
I bought coconut sugar ( the sugar made of coconut ) in here.

We went to Damnoen Saduak Floating Market.
It is located 80km southeast from Bangkok and has atmosphere of floating city. 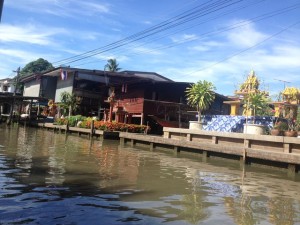 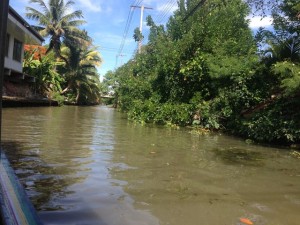 In the canal, the ship we took covered comfortable.Tropical trees were planted from side by side of the canal. 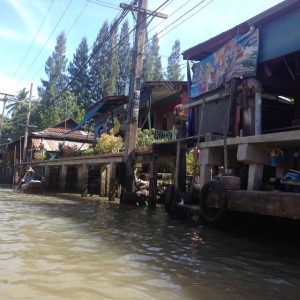 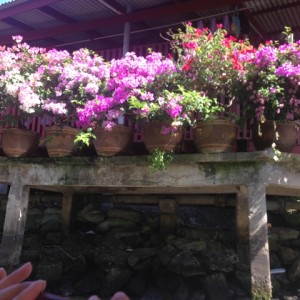 Along the lines of canal, the city exists. 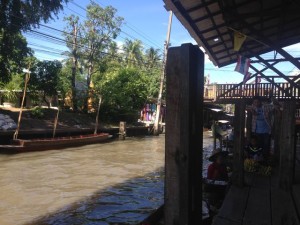 We ran about 30 min and arrived market.

I had been fasted from this morning, because had been looked forward to eat something at this floating market.(｡^ρ^) 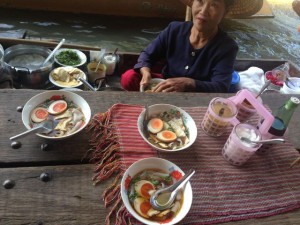 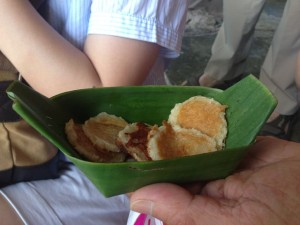 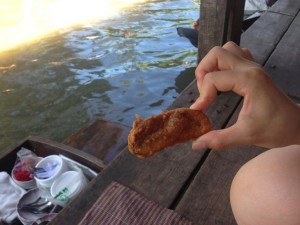 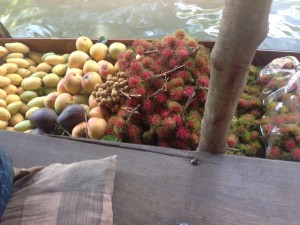 This is a fruits-laden ship.
Fruits were mangos, mangosteens, litchees, rambutans, papayas, and so on.

This is durian and I bought.
It is said fresh durians don’t stink.
It tasted robust and I feel it tasty…. 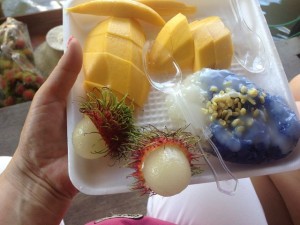 Mangosteens, rambutans, mangos with sticky rice.
Everything was tasty. 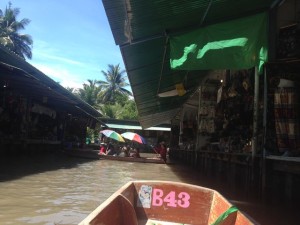 Then, we switched small cockboat and went to market, where sells chandleries. 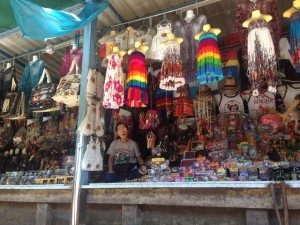 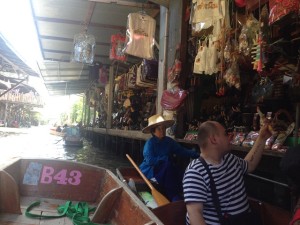 Here was different compared to Tonle Sap lake in Cambodia and I felt easy.

Finally, I forced a big trouble.

In my plan, I have to go to Suvarnabhumi Airport, but I arrived Don Mueang International Airport!

Reduced to Japan, I have to go to Narita Airpoat but I arrived to Haneda Airport.
Moreover, there were only 2 hours remaining until flight I have to board.

I had bad feeling in May 17th and I asked a woman at the front to take taxi and go to Suvarnabhumi Airpoat.
But, it was mistake.
I should have taken taxi on my own and shown the paper printed destination!!

I had a little hope “If I arrived valid airport within 1 hour, I may make it on time”.
And said to taxi driver, “I don’t want to go to here, but Suvarnabhumi Airport!” (only words and gesture)

But the driver said repeatedly, “the hotel said me to take you to this airport, this is not my fault.”
It wasn’t making any progress.

Then,
I remembered the existence of free shuttle bus.I researched well and simulated repeatedly before the trip, and I could remember.
In the case of outward, it took 40 min. So it may make it on time!

I asked security agent the place of aboard free shuttle buses,
and ran from 1st floor to ground floor having baggage.ε=ε=ε=ε=ε=┏(ﾟロﾟ;)┛ﾀﾞﾀﾞﾀﾞｯ!!

Before 10min of departure, I boarded the shuttle bus.ε=ε=ε=ε=ε=┏(ﾟロﾟ;)┛ﾀﾞﾀﾞﾀﾞｯ!!

The bus ran express way but ran into traffic jams.

Each time the bus ran into jam, I thought if I couldn’t make it on time,
how much should I have to pay to board next flight,
and I shouldn’t have to go to Bangkok. (Ｔ＿Ｔ）

But, I also thought it was better being keep myself company.

If I accompanied friends, children, and husbands, I have to apologize, be careful, or be accused. And I have to share feelings.

I just think myself because being keep myself company.
If I couldn’t make it on time, I don’t bother anyone, don’t have to say my feelings and I get all the blame.

I feel funny myself thinking written above.

As a result, I arrived valid airport 50min before departure.
ε=ε=ε=ε=ε=┏(ﾟロﾟ;)┛ﾀﾞﾀﾞﾀﾞｯ!!I ran counter and made it on time in my way or another.

So there was no picture and I couldn’t buy any souvenirs.
The picture of airline food was left. 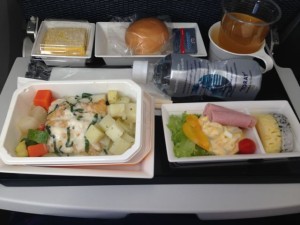 When I arrived my home, I exhausted….
through this trip, I decided to not to plan any foreign travels for a while.

But I want to plan next foreign travels now….
（￣▽￣）。ｏ０○