I would like to go Angkor Wat and another place,
touring in Siem Reap, Cambodia. 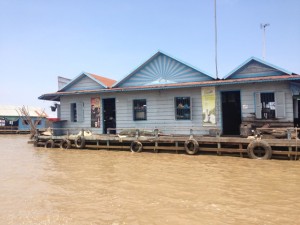 The place is “Tonle Sap”, the village of life on the water.

According to a guidebook, poor people live on the water, catching lake’s fishes.

This time, visiting here, I felt a thing strongly.
“Cambodia”, “refugee”, and “poverty”, such words are communicated via TV programs, magazines and information of the Internet with sadness.
But, here is different, without sadness.
I impressed here in other meaning.

Tonle Sap is the largest lake in Southeast Asia.
But its area quite differs between dry and wet season.

It is 10km away from Siem Reap and located opposite side of Angkor Wat. 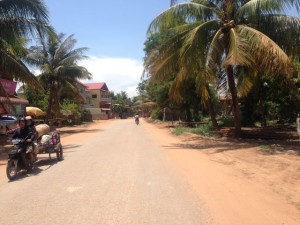 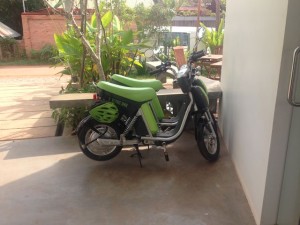 I went to there, using borrowed electric bike.
When I went to Tonle Sap, the season was initiation of wet season and it was not rain.
So water depth was quite low. 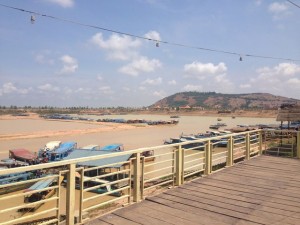 In a guidebook, it is more safe to enter for tour.
But I missed and thought to think on site, considering the price of a tour.
（I thought my son would manage to negotiate….）

At the reception, price was $50 in a twosome.
I felt it was appropriate. 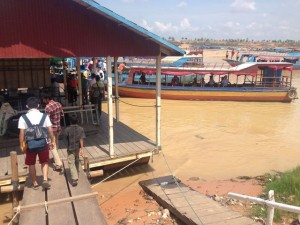 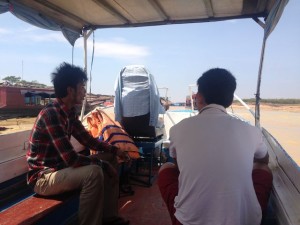 We chartered 1 boat with a guide, and he continued to explain the whole way.
（Because he speaks English, I could not understand.） 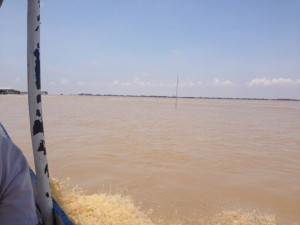 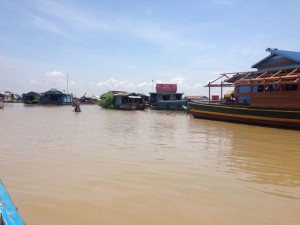 The whole way we went to the lake, he spoke the situation of the village’s people.
How labored, awful and poor they are….

Last flood washed away houses on the lake, and there are many children who lost their parents. 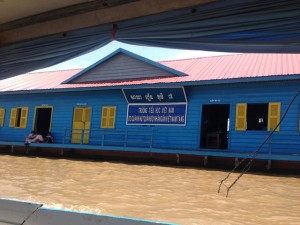 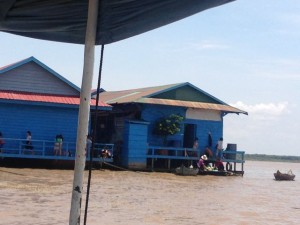 In here, the school is also on the lake and children board boats, row and go to the school.

When we get to the town on the lake, guide said
“To enter in the town, we have to transfer smaller boat and it takes $50/person more”.

I have no mind to pay anymore and let my son to say “We won’t enter in the town, head back here”.

The guide said to driver to head back reluctantly.

But, the return road’s direction was wrong???

The boat cruised the direction where is narrow and there are many houses.

Driver docked near a house, and said us to enter the house. 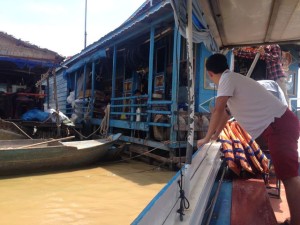 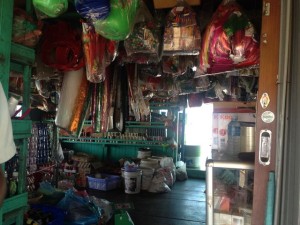 The house looks like a shop and I thought we can buy something.
We entered there thinking to purchase goody.

An old man and lady were in the house.

Then, guide said “donate the house.”
What？

They sell nothing, they need only donation.
Moreover, it sums up $50!!!

Although we said “NO”, they held on.
It could not be helped and we passed $10.

The lady in the house received for granted, and there is not so much as “thank you”.
This area build up with such system.

I felt quite annoyed.

After that, we managed to arrive dock.

When we dropped off, my son was said by guide to give him $10 as chips.
And my son passed $1 worth of Cambodian paper currency, he refused. 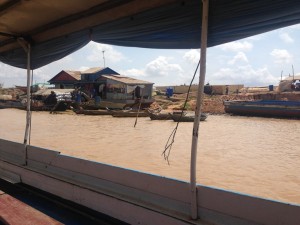 I was thinking occurred things in this tour.
Receiving money is naturally, and houses and tourist spot earn their living based on received money.

Although I hear “Cambodia”, ”refugee”, ”poverty”, ”donate to miserable children” and I think most of donation projects in Japan are allowable.
But, here, Tonle Sap is different.

They have to think the way not just to receive money, but to make money, making something and selling those.

I won’t know if I doesn’t go, and if I enter the tour.
I discover another side of developing country, where became tourist spot in a halfway manner. 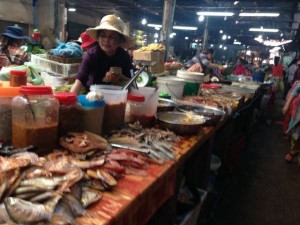 The fishes caught in Tonle Sap were sold in market in Siem Reap.

At first, I got angry.
But now, I think this is very fruitful sightseeing, because I can think many things.

・next→  the town of Siem Reap, sightseeing edition（May 15th）